Janice happened to strike up a casual conversation with a friendly woman walking her dog at Long Beach on the west coast of Vancouver Island.  Seeing that I had camera equipment, she said that a friend was going to be photographing black bears trying to catch salmon that afternoon, and where.  This opened up a new world for me.

The Thornton Creek Hatchery is relatively new, off Highway 4 between Ucluelet and Port Albion.  After bumping along on a dirt road for 1 km, one is soon there.  Port Albion once referred to itself as the Salmon Capital of the World, but those prosperous days are now past.  To everybody's surprise, this year's run was the largest recorded since 1913, but the last several years had officials thinking the salmon might be nearing dangerously low levels.  The hatchery people have created this new place for hatching salmon by diverting a stream (which never could have supported salmon spawning because of the height of the water falls). 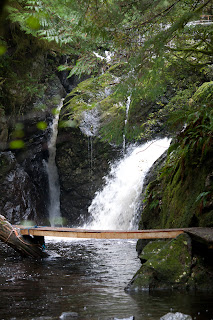 They have now built a short ladder and holding pens for various stages of development.  They capture salmon, collect and fertilize hundreds of thousands of eggs, and raise the tiny fish in the water diverted from the mountain stream.  Those fish then become implanted with the stream's unique combination of minerals and smells.  The fish are released after several months, and years later those that survive will return to this very same short ladder, their eggs will be collected and the whole process starts over again.

Not all survivors make it up the ladder, thanks to the local black bears.  Our two visits were both on very dark and rainy days, but the salmon apparently feel safer in shallow water when hearing rain, and salmon attract bears.  The bears have learned to come only at low tide, hoping that a fish or two will somehow be stranded in the shallow water while preparing to climb the ladder.  Fish in water even 3 feet deep are apparently safe.

The Society has constructed a ladder which the more healthy salmon can negotiate.  There is also a sturdy boardwalk letting visitors observe jumping salmon (I saw none, it was likely too late in the season).  They also kindly built a small roof to keep at least a few people dry.  This area was at times crowded with photographers.  I liked the cartoon on the donation box; showing one feasting bear explaining to another, "I finally figured it out . . . red with photographers, white with fishermen." 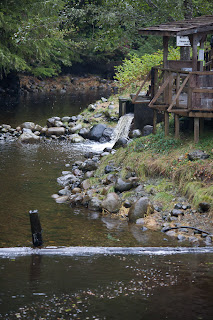 Signs remind visitors that these seemingly cuddly teddy bears are to be respected.  I was amazed at the difference between a black bear lumbering, slowly swaying, looking half asleep--and the very same black bear suddenly pouncing on a fish, faster than I could see.  They move incredibly quickly.  Fortunately, they seem to respect people, as long as one does not come between a mother and her cub, or surprise them, or neglect to leave them an escape route. 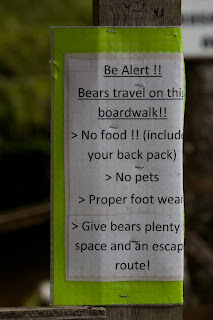 One our second visit, I did indeed see a black bear travel on this very boardwalk.  I'm told black bears have the right of way . . . I was on the road, ready to climb into my car. 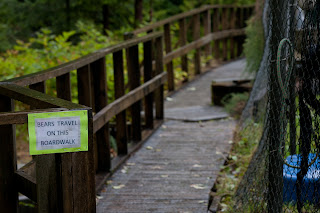 At low tide, some salmon get trapped in more shallow tidal pools which are also fed by the stream having that special combination of minerals and plant life that has been somehow implanted on the salmon's mind.  Even after their exhausting trip, salmon can be swift swimmers.  But at a certain point, I understand that their beaks get hooked (they can no longer really feed), and they know they have to spawn. 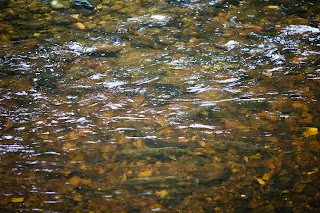 One bear checked to see if any fish were hiding under a log creating low-tide pools. 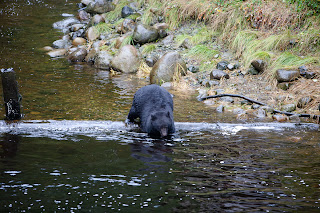 She then watched patiently by the fish ladder, but without success. 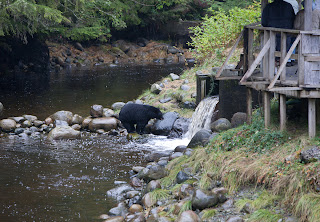 These two bears were obviously not pals.  The smaller one is forcing the larger one to depart unceremoniously. 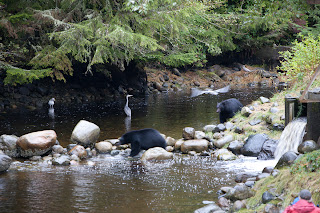 Standing on rocks gives bears better perspective of what might be moving in the water below.  I was told that their eyesight is not terrific but that they can detect movement superbly. 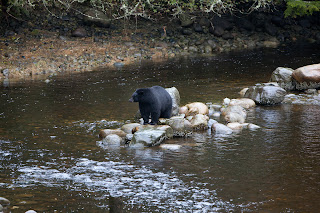 Occasionally a bear would dry off a bit. 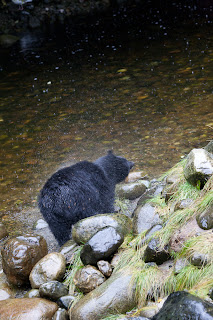 One bear actually climbed into the covered fish ladder to see if there was anything to eat.  Intrepid Wayne got tired waiting for the bear to come back out, so he looked into the ladder to give us a progress report.  He comes here regularly to take photos (his link has quite a few informative shots taken this October).  He has named each bear, watched their relationships change, learned to know their behavioral patterns, and respects them.  He also likes to get down at eye level with his tripod and telephoto lens.  His pictures are far better than mine.  He very patiently explained what was happening and what to look for. 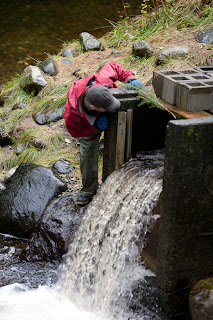 Finally the bear emerged, empty-handed.  He had clearly made this trip before. 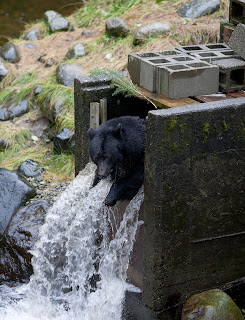 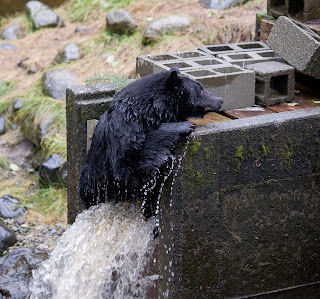 Bear climbing toward the boardwalk . . . this is when I made my retreat. 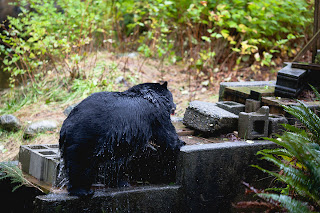 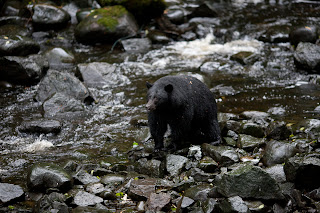 Finally a bear found a dead, exhausted or possibly dying salmon in one of the pools.  I understand that these bears will eat all kinds of fish, fresh or "pickled". 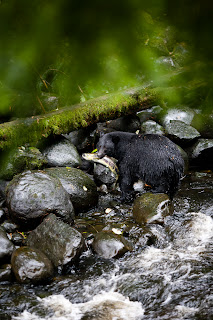 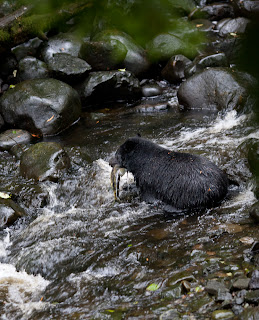 Seeing how patient bears have to be for their meals, I waited with unusual patience for our restaurant meal that evening.
Posted by J. Evan Kreider at 10:39